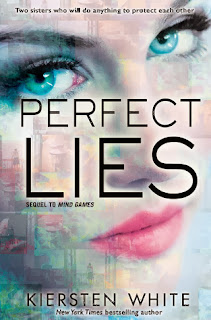 Last year Mind Games won me over with its focus on a pair of sisters, its fast pace, and unusual structure. It also left me with a ton of questions that were going to require answers in this sequel in order to keep me engaged with the characters and story.

Again the sister-sister relationship is what pulled me in. As I continue to struggle with my limited attention span, it was difficult to straighten out the crazy timeline in this book (though that got simpler as more was revealed) but that connection between Fia and Annie sucks me in every time. In fact I would say that everything I like most about this book is due to that crazy connection. I'm pretty sure I relate so strongly just because I have a sister no matter how different our relationship is. I also feel pretty confident that if this relationship doesn't ring true for you, this book will be a difficult read.

Also you should definitely read Mind Games first and what you did or did not like in that book is pretty much here too. For example, the writing captures the twitchiness (for lack of a better word) of the characters and it feels like it was written in just as much of a whirlwind as Mind Games. It feels darker than White's earlier Paranormalcy trilogy due to the dark nature of the paranormal powers and how they have been directed. Furthermore there are the extremely difficult decisions the girls must face as they grapple with their "fate."

As for me, I wished for more answers to my questions and I'm not sure they were as answered as they could have been. However that killer portrayal of sisters has me hooked! Between that and the twisty timeline jumping narrative, I don't even really need anything else.

Overall: I think you will like this book if you enjoyed the first but best to avoid if not.