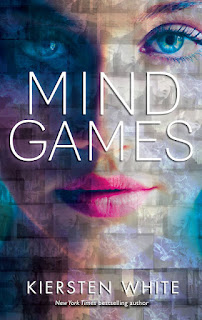 I think I've mentioned once or twice that I love books about sisters and then I've been a fan of White throughout her Paranormalcy series in addition to meeting her three times at book signings and following her blog. I also love stories told through flashbacks. So this book was kind of made for me!

Going in to the book, I had already skimmed a bunch of reviews (see some links below) and was prepared for a very different story from the Paranormalcy trilogy. Or at least I thought I was prepared.

I fell pretty quickly for sister one Fia, the younger unpredictable wild assassin. She is almost uncontrollable, laced with guilt, and pretty funny if not as quick with a quip as Evie. The other sister Annie is blind and kept locked up; love of Annie is Fia's motivation. As long as their captors have a grip on Annie, they can pretty much control all of Fia's actions. The ending of this book hints at a way Fia can fight back so we'll see what comes.

Why are the girls in captivity? Well their parents are deceased and their guardian had little interest in raising them. Their captors discovered Annie's ability to see the future and offered her a place at their school but Fia ended up being the real find with her perfect instincts. She can make winning stock picks, choose the unloaded gun, and do almost anything.

Besides the sisters, we meet a few other important characters. One is Eden, who can feel what others feel which Fia manipulates to amusing effect. The other two are boys. James is among the crowd who are keeping Fia and Annie contained; he and Fia have an incredibly complicated relationship. Adam is a boy Fia is supposed to assassinate in the beginning chapters but she finds herself unable to do so. He causes a fluttering of emotions in Fia and the push/pull of the two boys against the different parts of Fia's personality are fascinating to read. Because the book is short, I didn't feel like we got to spend as much time with them as I would have liked.

For the next book, for me to really become a fan, I will need more explanation of what Fia is fighting against. "Keane" is not a sufficient answer-who is Keane? Beyond desire for power, what is Keane's ultimate goal and motivation? I would also like to get a bit more insight into Annie-she came off as pretty weak and passive despite her attempts to be more and I would like her to be stronger. But despite these complaints, I will definitely be back for book 2!

Other Opinions: My blogging friends have talked about this a lot so I'm linking to more than usual
A Life Bound by Books-3.5/5
A Reader of Fictions-2/5
Beauty and the Bookshelf-Eh
Book Labyrinth-4/5
Reading Under the Willow Tree-5/5
The Book Lantern-1/5
The Midnight Garden-4/5
The YA Kitten-2.5/5