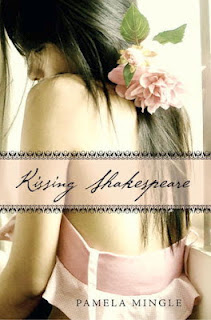 Like many book bloggers, I have a deep fondness for Shakespeare and I love retellings that incorporate him. I wasn't entirely sure how this one would do that but I knew I wanted to take a chance and read it. I thought this could be a cute read with a modern girl getting the chance to meet Will Shakespeare.

Well that's where the problem starts. The synopsis makes it sound like Miranda is asked to come back in time to meet Shakespeare; she's actually forced into it by a really rude guy named Stephen who has been pretending to be her contemporary who for some reason needs her to go back in time to ensure Shakespeare becomes the famous playwright he should instead of joining the Jesuits. I did think it was cool to learn more about young Shakespeare (I always picture him as Joseph Fiennes in "Shakespeare in Love") but I could not get past Stephen's jerky introduction and repeated meanness to Miranda, who is surprisingly calm if often acting in dumb ways during her journey to the past.

I could not connect with her at all and that's pretty much my main deal breaker. It took me several hours to get through the first 50 pages when I would have been able to finish the book had I felt engaged. I also would have liked more insight in Shakespeare's character as well as Miranda's inner conflicts since in the beginning of the book, she bristles against her actor parents' treatment of her and considers giving up acting as well. I thought that was referenced occasionally but not as much as I wanted.

For me the most interesting part ended up being the conflicts between the Church of England, Puritans, and Catholics. It's still fairly early in Queen Elizabeth I's reign and tensions are bubbling. Most of the characters in this book are Catholics masquerading as Protestants and plotting to restore England to the church. This isn't something I've read about much and I found it absolutely fascinating! I definitely need to check out some other books from the period that deal with this issue of religion in more depth.

Overall: Not the book for me although it has given me some topics to research!

Cover: I like the pink but the cover reminds me of some for eating disorder and abuse books so it doesn't really convey the story to me.