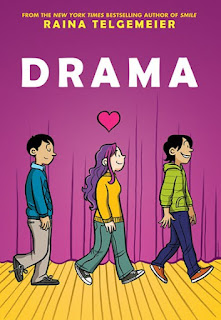 This book caught my eye with its setting in a theatrical production-I adore plots set in dance, music, or theater so that made this an automatic read with the added bonus of illustrations since this is a graphic novel. One other cool factoid is that Telgemeier illustrated the graphic novels of the BSC books; I own the first one and love everything related to that series so was already familiar with her drawing. This style is similar but in color so I was glad I had my Nook Color to fully appreciate that!

I happily opened the book and quickly read the sweet story about Callie whose love of theater is great and who faces significant amounts of off-stage drama while working backstage at her middle school's production of "Moon Over Mississippi." In connection with that, the story is divided into acts including an intermission partway through-not that I needed one. I wanted to find out how it all ended.

Callie is a sweet kid with a great mind as she tackles the challenges and applies herself to the hard work of putting on a show. I was less enthused with the drama off the stage just because I could see all the conflict it put Callie through. She and her classmates are still quite young even as they are growing in independence and it made me a little sad to see them obsessing over the drama instead of just having fun. Another problem for me was a pair of twins. Although they dressed and styled themselves differently, they still looked very similar to me, which makes it a little hard to always tell them apart. That's definitely on me though and needing to be a more careful reader.

Overall: A fun quick read set inside the exciting world of theater. I think it would be perfect for its target audience.