Confessions of an Angry Girl 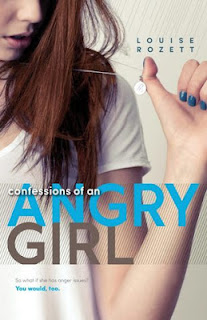 Confessions of an Angry Girl by Louise Rozett
4/5 stars
HarlequinTeen, 2012
266 pages
YA Contemporary

This is going to sound really bad but I didn't have very high expectations for this book. I just thought, "Oh cool, YA contemporary. That's my fave genre." And I've read a good amount and they can run together sometimes without the defined mythologies of fantasy or the various disintegrations of order in dystopias. So my expectations were minimal.

What I got though was a compulsively readable story with a very intelligent heroine who I could empathize with very strongly. Not that my family situation is anything like hers. First her father died in Iraq (not as a soldier but as a contractor). Then her shrink mom basically shut down and no longer talks while her older brother Peter throws himself into his first year of college, basically leaving Rose alone. Well, not entirely as she does have her best friend Tracy but Tracy is dating a jerk, seriously contemplating losing her virginity to said jerk, and joins the cheerleading squad in an effort to claim popularity. The two are very much at odds throughout most of the book. One last situation is junior Jamie, who Rose knows through her brother and who she kind of crushes on but who has a terrifyingly mean girlfriend who runs the cheerleaders. So there's a lot on Rose's plate.

Even though the specifics of Rose's situation differ greatly from mine, I still identified with her. Why? Because of her uncertainties in navigating high school for one. Like Rose, I sometimes felt like everyone else had a rulebook or had received some guidance that completely passed me by. And as a teenager I felt very uncomfortable in my skin. Additionally Rose is a good student with an interest in vocabulary, something that should connect with us bookish people.

I thought Rose's narration was excellent with a good balance between levity and seriousness. A prime example of the funny would be the oddly hilarious scene of Rose's first gynecologist appointment. I don't know why that struck me so but I was cracking up. On the more serious side is Rose's attempt to build a website honoring her father, part of her grieving process.

I did have a couple of problems with the book. Firstly Rose at 14 seemed a little young for everything that was happening but I think that is because the author wants to have multiple books covering her years in high school. Second was her crush Jamie. I think the conflicted feelings that Rose had were very well-written as was the kissing (not that this is a kissing book) but I didn't think much of Jamie himself. He certainly wouldn't have been the guy I crushed on.

Overall: I'm so glad I picked this book up because I ended up really loving it and I can't wait to find out how the cliffhanger is resolved in sequel Confessions of an Almost-Girlfriend.

Cover: Not my fave but I feel like the block characters convey a certain amount of anger as does the model's posture.