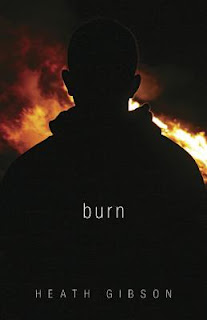 I thought the cover for this was very arresting-dark with just a touch of fire that hints at the plot of this book. Once I read the synopsis though, I snorted a bit. Main character William's nickname is Wee-Wee due to his short stature. That is incredibly unfortunate for him. This lack of height also prevents him from a romantic relationship with his image-obsessed crush.

Happily height differential was not a problem in our relationship as I quickly clicked with William, protective brother to his coming out of the closet brother, dutiful son to his high expectations preacher father, quiet to his drunken mother, and loyal volunteer fire fighter. It is this last role that fuels the plot as Wee-Wee begins to see the cleansing power of fire; it wipes out the old and gives you a chance to start anew.  Thus he begins setting fires, using his training to minimize their danger and to ensure no one is hurt. However the lies keep piling up until the shocking and (in my opinion, too) ambiguous ending.

After reading a couple of reviews, I was very unsure about this novel but I find William to be very sympathetic with well-written thought processes that explain exactly why he finds his arson streak to be justified. He's wrong, of course, but completely understandable. I really felt for him as he tried to fight the many wrongs he sees in his community as well as live up to expectations in his broken family.

Other great characters include an amazing teacher who is fired after an accident, Will's brother Steven who boldly steps out and owns his homosexuality despite the many bigoted reactions he receives, and new girl Samantha who also steps out and owns her actions, trying to make a better tomorrow. The setting will also likely be of interest to some people, a small town in Alabama, illustrating the closeness of that community-people will step up and help out but it's nearly impossible to keep a secret of any kind.

Overall: A very unique concept that brings up a lot of discussion topics but the ending left me disappointed.