Jump Into the Sky 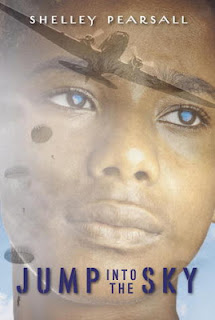 I was very excited to give this book a read as it is set in America during the waning days of WWII (we actually experience V-E Day as well V-J Day). I haven't read many books during that time and lately have read mostly European-set war books.

Our protagonist is Levi whose aunt has been keeping him in Chicago while his father serves in the army but who is sent to join his father at camp in North Carolina. When Levi arrives, he discovers that he just missed his father and stays with an injured armyman before they journey to Oregon to meet up with the rest of the men. It's not exactly the most exciting novel given that it's all in the US but I appreciated it (just a warning for other readers).

There are however several bursts of intensity surrounding Levi's trips through the South, where he experiences Jim Crow laws and receives threats based solely on the color of his skin. This is scariest when a shopkeeper turns a gun on Levi, who's really one of the sweetest book boys I've ever read, while forcing him to drink. I was actually prepared for even worse things to happen based on the time period and location but that was definitely the most overt aggression although there are many other instances of discrimination.

One place of discrimination is in the army (remember that troops were still segregated although integration will be coming soon). Levi's father was part of the 555th Parachute Infantry Battalion, an all-black airborne unit, whose members crave to serve their country overseas but who are relegated to the homefront, including fighting fires in Oregon and searching for elusive Japanese fire balloons, the very existence of which they come to doubt although their work is eventually justified. Again this isn't something I know much about so it was great to learn something new.

Lastly I wanted to mention themes of family and sticking together. The members of Levi's family always seem to leave, starting with his mother and continuing with his father's wanderings. It makes Levi wonder about his own constancy until the events of this book prove his loyalty and consistency. I also really loved the family Levi stays with in North Carolina. They are a young couple who have a child during that time and they are just good people trying to do their best under difficult circumstances and of course I loved that they took care of Levi.

Overall: A sweet slower-paced book about the homefront toward the end of WWII; vivid descriptions and characterizations reward the reader.

Cover: I'm not a huge fan of the cover given the huge face on the cover although at least he's not staring at me but I do like the plane and paratrooper superimposed over his head.