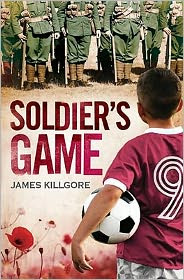 I probably would have skipped over this book when browsing the catalog on Netgalley as it appears to be about war and soccer (neither of particular interest to me as it seemed unlikely to also include romance) until I saw that it included a plot about World War I. This made me think of the wonderful movie Joyeux Noël, which looks at a truce between sides at Christmas 1914; I also believe a there was a soccer game shown but it's been a while since I've seen this film. That little tidbit was enough to convince me to request the book and its short length convinced me to pick it up recently.

Happily I was blown away and moved to tears (I was actually reading this on Veterans Day) by this simple story about the Hearts of Midlothian football club and the battalion they formed with others to fight in the Great War. This is told to aspiring soccer player Ross by his grandmother whose father, Jack, had been one of the players and soldiers. It is his "football kit" that is discovered and inspires Ross to learn the full story.

Through the narration of the grandmother, the reader learns about Jack's immense luck in being called up to play, his joy in the game, and his desire to prove himself. This is all derailed by a great war, where men are jeered at if they are healthy and fit but not soldiers. Together the football club and others form a battalion and march off to war.  Some lose their lives, some lose limbs, but those who return have lost their opportunity to play soccer and instead become quiet and somewhat forgotten heroes. There is also included another story about a contemporary player whose quiet battle with cancer inspires Jack as he heads onto the battlefield.

Through hearing this story, Ross is encouraged to act and earns his great-grandfather recognition for his sacrifice as well as improving in his own soccer skills, such that he can take advantage of the opportunities provided to him by his great-grandfather and other soldiers. I'm actually getting a little teary-eyed writing this review because it just hit me on all emotional fronts.

Overall: A great blending of contemporary and little-known historical that educates and engages your emotions. Highly recommended!