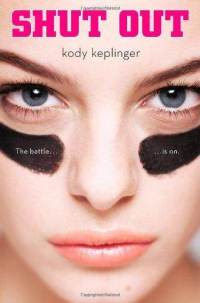 This is Keplinger's second book and highly anticipated by me after reading The Duff. It is inspired by the Greek comedy Lysistrata where the women withhold sexual favors from their husbands in order to get them to end a war. In this version, it's high school girls who are fed up with their boyfriends' rivalry between the football and soccer team (which I totally agree-what's the point of hating a player from your own school? Hate on the opposing team instead!)

I was originally going to give this a 4 but I gave The Duff a 4 and I didn't like this one as much so it had to be lower. I think this shows how difficult assigning ratings can be. I still like them so I will continue to use them but it's hard to quantify my feelings toward a book so it's definitely important to read my review to see where I'm coming from.

I started out really liking Lissa, who likes to organize and control things and who has a nervous tick of counting when she's nervous. Not to over share but I kind of have the same thing. I remember my hated eleventh grade English class where I would constantly count how many students were in the class, mostly as a way to cope with how bored I was. I also liked seeing her get away from the jerk boyfriend who was pressuring her for sex and developing a better relationship. I also loved seeing the friendships develop amongst the girls and seeing some burgeoning feminism as well as the frank discussion of sex. So often it's kept under wraps and girls are made to feel abnormal instead of being able to discuss how they feel in the open with their friends.

However I didn't really like Cash, the new boyfriend who often came off as sketchy and I don't think he treated Lissa that well either with confusing mixed messages and some domineering stuff. Yes, he's better than the other boyfriend but he's not great. He's more of a Mr. Right-Now.

Warning: A lot of language-I definitely didn't curse that much when I was in high school nor did any of my friends. I thought it was a little over the top but I guess some people do really speak like that.

Overall: Engaging writing but I was a bit put off by the language and I didn't love the main character as I much as I wanted to despite some of our similarities.