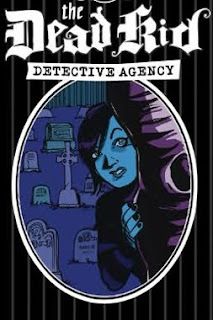 I really wasn't sure what to expect when I opened this book as I wondered who exactly was the dead kid. It does take a bit to get explained but before that we might the delightful almost-thirteen year old October, who skipped a year to enter high school in Canada. She and her father have moved to a new town, giving them both the chance to start over.

October promptly makes an enemy from a mean girl in her grade but also makes a couple of friends and finds a favorite teacher. After he is discovered dead, October becomes consumed with the notion that he was murdered and enlists the help of five child ghosts she accidentally raised to investigate. As part of that investigation, she learns about various aspects of Canadian history, her mother's mysterious disappearance, and basic detecting skills.

I tried to make a point of emphasizing that the setting for this was Canada because the FLQ, a terrorist organization that wanted to make Quebec independent, plays a big role. Other important historical events play a role in the lives of the dead kids and, as this seems to be the start to a series, we will surely learn more.

Besides enjoying those historical elements, which weren't that prominent if you find yourself leery of them, I loved the characters. October is tough and determined, with an offbeat sense of humor. The five dead kids are all distinct personalities from different time periods. Some are more helpful, some are more resigned to their deaths but all soon warm to the task of determining if the teacher was murdered and who could have done it. That leads to several zany adventures involving some people being able to see the ghosts, some unable to do so, and general chaos ensuing.

Overall: A whimsical and promising start to a new series-excited to see what will happen.