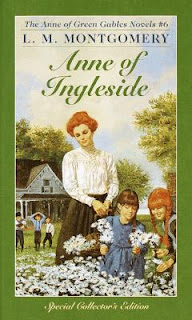 By this book, Anne has five children (with one more on the way) and is consequently very busy. Thus this book tends to focus more on the adventures of her children rather than her own, giving me somewhat of a Cheaper by the Dozen vibe. Of course, I am sad to not have as much Anne but her children are a lot like her and there are still some good bits. This is especially disappointing as the book jumps around and alternates focus; I would have preferred a narrative that only followed Anne as the previous books did.

My favorite part was in the beginning when Gilbert's aunt comes to stay for two weeks, which is soon extended indefinitely. This woman is not pleasant and she grates on the nerves of everyone: Gilbert, Anne, the children, and their live-in maid Susan. Still she provided much entertainment to this reader, especially whenever she took offense at something.

The other part I anticipated was Anne's doubting of Gilbert's affections for her. She works it up into a big thing, terrified that Gilbert may now care more for the girl he hung around with in college (while Anne was seriously dating another man, I might add!)  This is teased on the back cover and I assumed it would cover many pages and chapters. However it was vastly overstated and of course Gilbert cares for no one but Anne. It's patently ludicrous to suggest otherwise; he's been hers pretty much since they met.

Overall, I would have to say that this is one of the lesser efforts. I kind of feel like even Montgomery was over Anne by this point and just wanted to get one more book out there for her publishers even though she wanted to explore other worlds and characters.