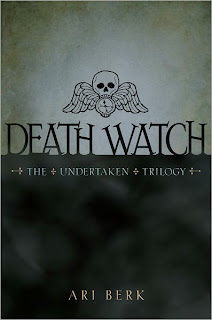 I've really struggled with writing this review as I'm not entirely sure the best way to convey my thoughts. I'm also not sure how much you'll want to know going in. I knew very little when I picked up this book, which left me to marinate an atmospheric read. While somewhat dark, dealing as it does with death, there were moments of lightness that really sustained me through the slog.

I guess we'll start with the bad, which is not a long list. For me, this book just felt a little too long. There are many descriptive passages and nothing much seems to happen in about the first two hundred (my estimate) pages except for introducing characters and the various plot threads. But then they do start to come together and more of the world makes sense. I was in for the long haul; I just wish it hadn't been so long. Onward to the good!

The setting of this book is kind of hard to describe as it seems contemporary in many ways but there are also elements of myth, fantasy, and historical. It could almost be said to be set in a version of our world and yet not quite. The main difference is the relation to death. Although people die in that town, the dead aren't necessarily like our dead. Some who have died decide that they still have other things to do. Some don't leave peacefully and need help. Others just need the proper respect and tribute before they leave for all time. That's where Silas Umber's father comes in.

Through his long absences from home, Silas believed that his father was simply an undertaker. After his father's presumed death though, he discovers a great many secrets contained in his parents' hometown and even in his ancestral home where his uncle brings Silas and his mother to live. But Silas rebels against living under his uncle's thumb and begins to explore his father's legacy including the mysterious Death Watch, a watch that allows the owner to see the dead (this explains the title, which I had originally assumed related merely to keeping a watch over the dead).

While in general I didn't feel much for Silas, I did like the supporting characters, especially Silas' great-great-great grandfather, whether they were interested in helping, encouraging, or thwarting Silas in his mission to discover his father's whereabouts

Overall: I thought it was a little slow and given the length of the book, I felt every page of that slowness but there were some interesting descriptive passages and the book did pick up toward the end. I just wish some of the earlier passages could have been excised so that the action could have started sooner. Once you're immersed in the book, the magic really comes alive and the world-building is truly fantastic.