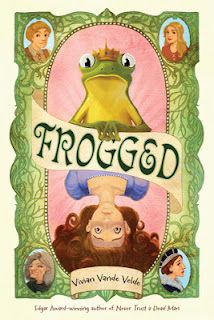 I've read a few of VVV's stories and of course I'm a sucker for fairy tale-esque stories, which this one seemed to hint at based on its mention of a princess kissing a frog. The twist this time is that the girl turns into a frog after kissing the boy and she can only return to her human form if she gets someone else to kiss her. Being that she has scruples, she sets off to discover a way to not have to transform someone else into a frog.

I don't have too much to say about this book as it is not very long. The story is very cute with an incredibly readable style-I finished it in mere hours as part of my mini-readathon. The princess learns some valuable lessons during her time as a frog that better prepare her for her new role as a more mature princess.

I think this would be a better experience for younger readers as older readers will probably find the story very familiar especially if they love twisted fairy tales like I do. The stakes and events didn't get high enough and the action moved rather lethargically especially for a reader accustomed to the fast-paced moving narratives of YA. It would also be fun as a read aloud bedtime story for the family.