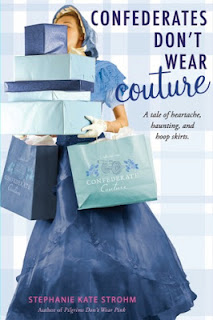 Source: Received an ARC for review through Amazon Vine in exchange for an honest review.

Last year, I had the great delight of reading Pilgrims Don't Wear Pink, about the summer adventures of a young girl named Libby who reminded me a lot of myself. She loves history, fashion, reading, Jane Austen, among other interests and I immediately clicked with her. Although that story was standalone, I was pleased and intrigued to find out there would be a sequel.

This one follows the summer after graduation with Libby and her best friend Dev embarking on a tour within a Confederate reenactment army to sell gorgeous and authentic gowns. Meanwhile her boyfriend is at his internship in New England and a new guy starts demonstrating interest in Libby. To add to the chaos, there is another ghost haunting them!

For the most part, I would say this book has the same kind of lighthearted tone and style as the first book. If you ate up that story, this will go down similarly. It is set over the course of a summer and follows a similar structure while also representing some growth on the part of Libby. A big change this time around is that Libby and Dev set off on their adventure together, which was a fantastic decision because Dev was such a highlight during his too brief appearances in the first go-around.

As a lover of history, I found the elements here even more enthralling. Is there a time period more beloved by American history buffs than the Civil War? I don't think so and this book did a great job of portraying the deep passion people still have. Personally I wish the Union had gotten a bit more attention as they fought for what was right and won but Dev made a good point that the contemporary Confederate side will pay more and you've got to follow the money.

Overall: A fun and flirty delight all the way through-highly recommended for fans of book one and this is a great (clean) beach read!