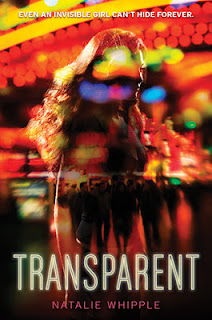 Transparent by Natalie Whipple
3/5 stars
HarperTeen, 2013
368 pages
YA Paranormal
Scheduled to release May 21

I saw this book billed as a cross between The Godfather and X-Men, which sounded pretty cool to me. I have enjoyed the books and films for both and was excited to see a teen twist on it. Some early reviews I'd seen were positive and I know that HarperTeen tends to publish very addictive novels so I was excited to find out more.

The basic premise is that some people were born with abilities and those abilities are exploited by powerful crime bosses. One of the most unique people is Fiona, who was born invisible and whose crime lord father has exploited this ability, raising her to be a tool in his criminal empire. One day she is pushed too far and she and her mother go on the run to escape. While in hiding, Fiona meets a group of other talented people and begins to build a new family to stand up to her evil father.

As I said, I tend to find the writing of HarperTeen novels to be very easy to read and difficult to put down. I didn't find the writing here quite as compelling, perhaps because I read it on the heels of some other books or maybe it just wasn't my taste. Either way that lack was probably the main reason I didn't really enjoy this title.

What about the characters? Well, they were okay. I can't say that I have very strong feelings about any of them other than loathing Fiona's father and having complicated feelings about her brutish older brother Graham. He is mostly presented in a negative light except for occasional flashes of goodness that left me in a confused state. There is almost a bit of a love triangle but I cannot expand further without spoiling some things; no matter as that aspect didn't interest me.

On the bright side, it looks like this book is a standalone, always exciting to see in paranormal YA. I also did really like the ending climax when Fiona and her motley crew assemble to face off against her cruel father. Everyone had their piece to play and they pulled off their scheme impeccably. However since I didn't really enjoy the preceding pages, this finale was not enough to leave this book in my good graces.

Overall: My general impression is just that this book is very average-nothing pushed it to stand out to me.

Cover: I thought it was okay-very flashy but then I saw the UK cover and I actually prefer that. You can check it out on goodreads here.

Other Opinions:
The Overflowing Library
Pure Imagination
Some Like It Paranormal