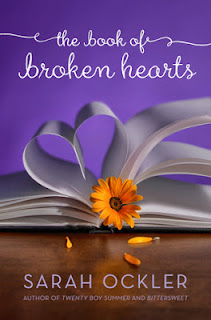 The Book of Broken Hearts by Sarah Ockler
2/5 stars
Simon Pulse, 2013
357 pages
YA Contemporary Romance
Scheduled to release May 21

I must say that I adore this cover! Before I started this book, I was telling my coworker about it as my next read and I mentioned that I couldn't remember what the plot was supposed to be about; however the cover was beautiful. If you do bookish manicures, I think it would be really cute to have eight nails purple and then two orange.

Unfortunately that is probably the element about which I can be most positive as this book irked me in a similar way as Bittersweet did. My strongest memory of Bittersweet, after almost two months, is that main character Hudson pushed aside her friend ostensibly in pursuit of a larger goal but mostly because of some cute guys who ran hot and cold. Similarly in this book, Jude pushes aside her friends, justifying it to herself as wanting to spend more time with her father who is suffering from early onset Alzheimer's disease but moreso because of the cute boy who has entered her life. I found Jude fairly insufferable due to this and as she is the narrator, that made reading this book difficult.

In a weird way though, I felt like the romance wasn't that front and center despite what the summary seemed to suggest with family taking up more space on the page but with nothing sinking into my consciousness and heart. I also found Jude a bit naive. She has just graduated high school and is all set for a great summer before heading off to college. But her father's loss of facilities (diagnosed by the doctors) dominates her thoughts instead and for some reason, she seems to think she can reverse it if she can just restore his old motorcycle (with the aid of Emilio Vargas, youngest brother of the boy who broke the heart of one of Jude's sisters). I understand not wanting to accept the negative prognosis from a doctor but I thought Jude just seemed really stupid not to recognize what was happening. Her dad was not going to magically get better because of this ill-conceived plan. I think that added to my frustration along with how Jude pushed aside her friends while grabbing every opportunity to hang out with this new boy.

As I continue to think about this book, I recollect that it is not only the cover I liked. I loved the cultural heritage of the characters. Jude's family is of Argentine descent and Emilio's is from Puerto Rico with food, music, and language references to these heritages. I don't know how much that added to the story but it was a unique element.

Overall: This contemporary did not wow me at all-it felt pretty familiar although the diversity of the characters is new and appreciated.