ARC Review: Wednesdays in the Tower 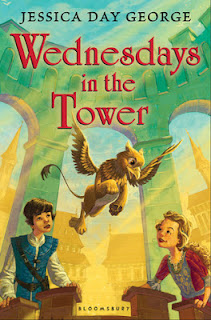 After being absolutely enchanted by Tuesdays at the Castle, I was thrilled to see that a sequel would be released. I was eager to return to the world of Castle Glower and to hang out with Celie as she chronicled its ever-changing halls and rooms. This second book promised more delights!

We are dropped back into the castle, where life seems to have settled down after the tumult of the events of the first book. But Castle Glower cannot remain quiet for long with Celie's life being shaken up by the hatching of a griffin, a species long thought extinct, who Celie must keep hidden amidst the ever-changing rooms of the castle and its population.

I thought this book was such a cute fun fast read; it was one I picked up during my recent personal readathon and just flew through. Celie is as tough as ever, bearing up well under difficult circumstances. My hope for this sequel was that the parents and rest of the family would be around, which came true. As I predicted, Celie is still able to get up to plenty of mischief even as her parents evince an interest in what she is hiding.

Something else I loved was the mythology around the griffin. They have mysterious origins and it is uncertain if they will continue to survive as there seems to be only this one. Who knows about the history of griffins? Why is there such a paucity of information? Is someone trying to stop Celie and her family from learning more? These are some of the questions teased and it seems that there should be a third book to further explore.

Still while I had fun reading this, I didn't enjoy it quite as much as its predecessor just because it seemed to be continuing in the same vein instead of adding and deepening the world introduced. I loved our first glimpse at Castle Glower but I needed more from this book to really fall in love.