ARC Review: Gameboard of the Gods 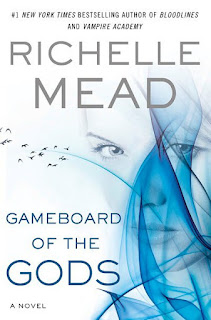 Although I've seen Richelle Mead's name around a lot, I've never been too tempted to pick up her popular YA vampire series-I'm just not that into vampires. However the mythology mentioned for this book really caught my eye so I decided this would be my introduction to her writing. If this is typical of Mead, it seems like I will need to read Vampire Academy sooner rather than later because I really enjoyed it!

It's totally in alternating third-person perspective switching between Mae, a fierce soldier, and Justin, a discredited servitor being brought back into the fold with Mae serving as bodyguard to discover the truth behind a series of mysterious murders. Justin was thrown out years ago and suffers from a god delusion (or is it?) while Mae is recovering from the death of her lover.

I really liked both of these characters who I found to be filled with personality and are still making me smile a week later. Both have their fair share of snarky comments with other characters getting to chime in as well. I especially liked meeting Justin's protege, Tessa, and the ravens in his head (no comment-the reasons behind this are elaborated on).

However I really struggled with the world-building. There are castals and I believe Mae is one of them but that it's not exactly a great thing to be? Also some of the information around how the world reached this point could have been expanded upon. I'm a reader who tends to like getting a lot of information especially in fantastical settings so that probably helps explain some of my disappointment. I am also using this confusion as the reason why I couldn't unravel the mystery behind the murders....definitely that and not the fact that I'm horrid at solving mysteries.

Overall: A very pleasing introduction to the writing style of Mead-I will certainly be back for the second book!