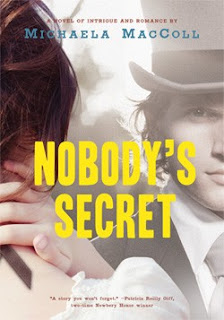 I've read both of MacColl's previous books and have really appreciated her focus on young historically significant women. Previously it was the young Queen Victoria and aviatrix Beryl Markham. This time we are visiting Emily Dickinson, a very well-known poet but not someone whose personal life I know much about. The book relies heavily on MacColl's imagination as it has Emily investigate what she suspects is a murder, something that has no direct basis in fact.

Still the book does a great job capturing what a young Emily might have been like. She is spunky and inquisitive, not a fainting flower, filled with a deep intellectual curiosity. I always say that I don't like poetry but that's not really true as I have liked what little I've sampled of Dickinson's writing and am pleased to report that excerpts from her poems open each chapter. Themes from her writing also permeate the story such as a preoccupation with bees and anonymity while living in a very small town. Something else to think about is the effect of domestic labor on a woman's ability to write (very shades of A Room of One's Own, very subtle in this book). Emily's sister Vinnie (short for Lavinia) is one of the most important secondary characters and I was pleased with the role of family.

As I said, this is a mystery with Emily attempting to uncover the identity of a dead man and insisting it was murder, piecing together all the clues. I had a sliver of an idea of what was going on but the villainy of the murderer was beyond my capability to imagine. I'm pleased that Emily was able to unravel the threads and gain some measure of peace regarding the man's final moments and I almost wish this particular story owed more to history than fiction.

Saying that, while I liked this book, I didn't love it. I wanted something more, that ineffable feeling an amazing book gives you and that was lacking here. Lovers of historical fiction and poetry should enjoy this as will fans of MacColl's previous works.

Other Opinions:
Have not seen any; if you (or a friend) reviewed this, leave a link below and I'll add it!