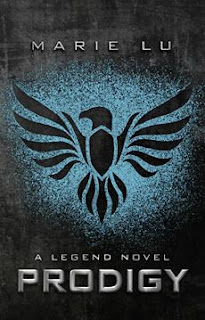 Legend was one of my favorite books from 2012 so I was heavily anticipating this second book especially after seeing so much positive buzz for it. My feelings about this book are also largely positive but there may be some SPOILERS so be forewarned.

June and Day are on the run: the prodigy and the criminal, united in a common purpose against the Republic (which reminded me very strongly of North Korea in this book). They are recruited by the resistance to assassinate the new Elector, June's old compatriot Anden. But on their quest to accomplish that, they uncover some surprising realities and keep the reader on the edge of her seat.

Now of course there is so much more to this story than the romantic parts but that has been my favorite section. June and Day are an amazing, smart, powerful (would-be) couple. And the fact that some people got in the way of that made me angry. Gah, I wanted to cut Tess! Anden was less irksome, I think because he didn't know June had Day but Tess knew and a girl I thought I liked in Legend became absolutely loathsome to me. I know that these two kids do not have an easy road ahead of them (made all the more difficult by the decisions of the last few chapters) but I'm rooting for them!

Like the first book, this is again told in alternating chapters, which were very easy to fly through. Day's font is blue instead of gold this time and I found that much easier to read while it also has the bonus of matching the cover. Also like the first book, this is filled with action, tough decisions, and stunning revelations. The world of June and Day is only getting darker and murkier-there are no easy paths and the ending left me near heartbroken but relieved that there will be a book three to hopefully give some resolution.

Cover: I am wondering if the third book will have red in the cover? Could look cool with the gray/yellow and blue/black covers.

Other Opinions:
Debbie's World of Books
Gone with the Words
Holes In My Brain
Jen Ryland/YA Romantics
Tripping Over Books