ARC Review: In the Shadow of Blackbirds 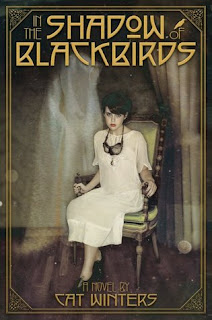 In the Shadow of Blackbirds by Cat Winters
4/5 stars
Amulet Books, 2013
404 pages
YA Historical Thriller
Scheduled to release April 2

I hope this isn't too morbid but I find the Spanish influenza pandemic of 1918 absolutely fascinating. Like it's not bad enough to have all the death from war, this catastrophic disease had to spread too. Yet I didn't really know that much about it. Well this book takes us deep into that time, latching on to the paranoia and terror felt by people in addition to their deep grief as almost every family is deeply affected either by the loss of a serviceman and/or someone to influenza. These deaths also fuel a craze for spiritualism such as taking photographs in the hopes of seeing your lost loved one as demonstrated in the cover photo.

Our protagonist is Mary Shelley Black, named for the excellent author and daughter to a now deceased physician mother and a father arrested on suspicion of treason. I wish we could have learned more about him but it seems that he has some German heritage and is very anti-war, reason enough to get the authorities involved.

Therefore Mary Shelley journeys from their home in Portland to live with her widowed aunt in San Diego. Their relationship is strained as Mary Shelley was caught kissing her friend Stephen whose cruel brother Julius spread the story that it went much further. This aunt is also deeply paranoid about the flu, draping their house in onions (apparently a real attempt). Julius has a spirit photography business that is booming in this time of tremendous loss and uncertainty but Mary Shelley pines for her sweet friend.

The bulk of the narrative is about Mary Shelley somehow being able to commune with Stephen, a sensitive young man who enlisted early and shares with her a story of torments from blackbirds. Mary Shelley spends most of her time attempting to puzzle out if the blackbirds are literal or figurative. She figures it out partially but doesn't put it all together until it is almost too late in a terrifying sequence. The writing around Stephen's torture and the suspense of what exactly happened led me to classify this book as a thriller and I think it may be too intense for some younger readers so read with caution.

Overall: A fast-moving thrilling story with a smart strong heroine and focusing on a lesser known time period: in short, it's good.