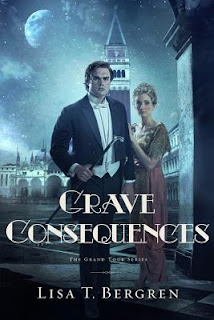 I really loved first book Glamorous Illusions last year so I was thrilled to check out the second book in the series with a cover hinting at something darker happening (also if that guy is Will, well, I've imagined him to be hotter, just saying.)

We immediately jump back into the story, leaving me floundering as it's been almost a year since I read the first installment. Soon however I was back in the rhythm, aided by the fact that this story focuses much more closely on Cora and Will. I remember the first book introducing all the characters including Cora's new found siblings but I felt like they didn't play as much of a role this time, at least not til near the end. It felt much more narrowly focused on the love story of Cora and Will. She is struggling to reconcile her new role as the daughter of a wealthy man with her long-time dream of teaching and living a simple life in Montana. He is barely afloat financially with debts hanging over his head and dreaming of being an architect while also longing for Cora despite the punishment her father would dole out to him.

Speaking of Cora's father, he is such a jerk. I didn't like him much in book one but he just continues to be manipulative and frankly cruel in this book. I understand some of his objections but he seems to be motivated largely by selfishness so it is hard for me to sympathize with him. Most grievous is him pushing Pierre toward Cora despite her uncertainty of him (and my love of Will!)

As predicted this book does seem darker. Although they continue moving apace through Europe (thus making it a book I'd recommend to anyone craving some great descriptive passages of the sights), they are haunted by the foiled kidnapping attempt at the end of book one. Are they really out of danger? Or are the children of two very wealthy men just too tempting to resist? There is somewhat of a mystery element around this and I was proud of myself for piecing one part together.

Last to mention is the religious element as this book comes from a religious publishing house. I'm Christian so I enjoy books that reflect my faith. I think that Cora does a good job of relying on her faith and the knowledge that all this money and opulence won't make her happy. The ending is especially good for her decision to wait and trust in the Lord.

Overall: A good second book that does move the story forward while also allowing you time to luxuriate in pre-WWI Europe.

Other Opinions:
Booktalk & More
From the Heart of a Bookworm
Short and Sweet Reviews