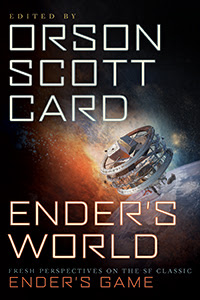 Like many people, I discovered Ender's Game as a child and have returned to it time and time again, always finding something new. I am tentatively anticipating the film version this year (Harrison Ford as Colonel Graff...for some reason I thought he'd be Mazer Rackham.)

As The Girl Who Was on Fire made me want to reread the Hunger Games trilogy, this book made me want to reread Ender's Game as well as explore the other books set in that universe, which I have never read. There are some brief references to the other stories but the main focus is on Ender's Game. Per usual, I will briefly look at each essay, which has made for a long review. Basically if you love Ender's Game, you'll find things to enjoy in this book.

How It Should Have Ended by Eric James Stone: The premise of this essay is one I identified very strongly with. To wit, that Ender's Game should have ended with Ender's victory. Upon my first reading that is what stuck me with the most and the scenes that came after seemed unnecessary and even confusing to me. Like Stone though, further readings gave greater understanding about those moments, adding to the richness of my experience. A great essay to start off the book!

The Monster's Heart by John Brown: Brown brings in some science to accompany his look at some of the most poignant parts of the novel, analyzing how fiction can still inspire very real responses in us humans. He looks at how Card evoked such strong responses and helped us visualize certain moments so vividly without necessarily even describing a lot. I especially appreciated his look at the bugger queen as I'm still wrestling with my response to the buggers.

The Cost of Breaking the Rules by Mary Robinette Kowal: Kowal attended a Literary Boot Camp from Card and learned all some writing rules there. She then proceeded to go through Ender's Game and find the multiple instances where Card broke those same rules. BUT that was as a writer recognizing that there was a cost to those decisions-a worthwhile cost but a cost nonetheless. I was pleased to see Kowal's essay here as I have enjoyed her fiction immensely.

Winning and Losing in Ender's Game by Hilari Bell: Bell looks at the cost of winning and losing in the book, specifically where winning costs more than losing and the toll this takes on Ender especially as he compares himself to Peter.

Parallax Regained: Two Views of Ender's Game by David Lubar and Alison S. Myers: This essay is a father and daughter writing about their experiences with the novel: he as a writer and she as a teacher and how it has impacted their professional and personal lives. It is written as a conversation/debate between the two of them. I especially enjoyed Myers' confession that she probably wouldn't have read it when she was young had her father been the one to suggest it.

Mirror, Mirror by Alethea Kontis: Kontis wrote the fairy-tale retelling Enchanted and looks at a prevalent theme in fairy tales as well as other stories: mirrors (as if you couldn't have guessed that from the title of the essay ;) Not only does the mirror reflect Ender to himself, the book itself reflects each reader to a degree, influencing what we get out of it.

Size Matters by Janis Ian: (sidenote: this woman inspired the name of the character in Mean Girls!) My favorite part of this essay was the observation that perhaps shorter people live longer. I'm 5'4" which is average for an American woman, I believe, but I've always wanted to be 5'10"-this note is helping me reconcile myself to my height. The thrust of the essay though focuses on Ender's size and its importance throughout the story because he really is so small, starting at Battle School younger than most of the other kids and pretty much always being the smallest.

Rethinking the Child Hero by Aaron Johnston: This book compares Ender to a Clint Eastwood character, which didn't really resonate with me as I think I've only seen one or two of his films and haven't had much interest in watching more (I don't care for westerns and that's what I mainly associate him with).

A Teenless World by Mette Ivie Harrison: Harrison looks at children acting in an adult world and speaking in an adult manner. Card makes this utterly believable-although Ender is but six at the start, I never found myself pulled out of the story thinking that no one that age would talk like that.  This book offers kids a chance to imagine themselves in positions of incredible power and responsibility and it's intoxicating.

Ender on Leadership by Colonel Tom Ruby (USAF, Retired): This military man discusses how Ender's Game impacted him and other soldiers with their conceptions of leadership, striving to add that element of extraordinary compassion and feeling that Ender has.

Ender Wiggin, USMC by John F. Schmitt: Schmitt discusses the history of the Marine Corps and its reorganization and philosophy in comparison to the tactics used by Ender in the Battle Room. This chapter also includes a look at Tactical Decision Games, which I immediately wanted to try out as soon as I can gather a group of people to explore it with.

The Price of Our Inheritance by Neal Shusterman: Shusterman looks at the war being fought and how it hinges on the question "How many people would you kill to protect the lives of your  children?" The answer: As many as necessary, which is displayed in the book but how does that impact Ender? At the end of the war, he is condemned by the very people he saved. A very thought-provoking read.

If the Formics Love Their Children by Ken Scholes: Scholes only very recently came to Ender's Game, in fact not reading the book until he was contacted to write an essay for this book. As such, he entered with an adult's mind and prepared to study the book against the background when it was originally published and how that has changed (and what has remained the same) over the years.

Ender's Game: A Guide to Life by Matt Nix: I mostly have to mention this one as the author is the creator of "Burn Notice," one of my mom's favorite shows and beloved by my whole family really. Throughout his life, he has connected with people because of this book and it has served as a guide as he figured out what he wanted to do with his life (eventually settling on creating an excellent action/mystery/thriller/comedic/romantic/all-around awesome show).

As I wrote this review, I realized just how many essays were in this book-there are so many perspectives! I also should mention that interspersed between the essays are some questions and answers from OSC, giving further (fascinating) insight into the writing of Ender's Game.