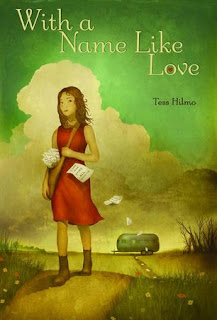 This is another book by a blogger I follow and a book that was receiving rave reviews so I felt fairly confident diving into this that I would love it. I've also had really good luck with middle-grade novels this year so that made me extra excited.

I'll start with only two minor complaints about this book as the rest was very pleasing to me. First is the setting is indistinct. I don't think it's important to know that the location is a small Southern town but it bothered me that we didn't learn until halfway through that the year was 1957; it seemed like a historical but I didn't have enough information to declare it so until then.*** The other was a rather graphic depiction of an event involving animal blood. It made me a little queasy and seemed a bit adult for a middle-grade even if it wasn't gratuitous.

But otherwise, I was very enchanted. Main character Ollie is the eldest of five daughters whose father is a traveling preacher named Everlasting Love (that's seriously what his parents named him). Ollie has been longing to quit the road and settle down for a while and she finally gets her wish when she meets Jimmy Koppel whose mother has been arrested for the murder of her husband. The Love family hunkers down as Ollie frantically tries to prevent the separation of Jimmy and his mother and battles against the deeply engrained prejudices of a small-town.

Ollie was such a lovely heroine; I really sympathized with her desire to plant roots in to one place as well as to her tight-knit family. Although there are five girls, each received a vivid sketch and came to life interacting just like bickering sisters who deep down do love each other. Their parents are also great-they are parents who are involved in their children's lives even if some things are past them, such as one daughter's desire to be a preacher; a girl, as preacher? That's crazy talk ;)  Jimmy is also a pretty sweet kid. There is also a mix of good and bad people in the town who create a real cast of characters.

Overall: Filled with love, family, and friendship overcoming overwhelming odds, a sweet read for most ages!