How to Save a Life 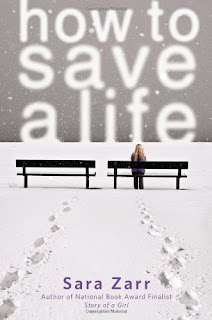 I've only read one of Zarr's books but was impressed by its depiction of religion and having seen buzz in the blogosphere for her in general I knew I wanted to read another book by her. Thus I requested this book. However this one didn't work for me.

The main reason would be that it is a character-driven novel, told in alternating points of views between Jill and Mandy. Jill's father died months ago, hitting especially hard due to their similar personalities. Her way of coping has been to shut people out and be even more mean than she already was. One of her targets is her mother who has decided to move forward by adopting a baby. Specifically Mandy's baby. Mandy has had a tough life with her mother, moving between the mother's various boyfriends and being raised with very sexist attitudes about relationships and how to comport one's self. My main impression of the girls was that Jill was mean and Mandy was embarrassingly young and naive; however the girls also had other unpleasant traits. I just couldn't stand them, which is unfortunate as I found most of the supporting characters quite likable.

Jill's friends and coworkers as well as her mother were extraordinarily patient with her even as she tried her hardest to push them away. The few people shown in Mandy's life were awful but they show how she was shaped even I would have expected her to be a bit smarter due to their treatment of her.

Still the writing is quite good even if the themes about family were a little overdone and the events of the book were predictable. Perhaps if the narrators appealed to me more, I would have been more swept away with the journey and less concerned about when the end would come.

Overall: A character-driven novel with awful characters, who annoyed me. Not the book for me.