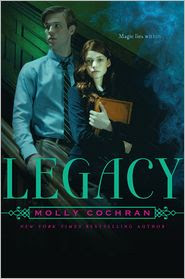 Source: Received an e-ARC through Simon & Schuster's Galley Grab program in exchange for an honest review.

To be honest, I thought this book was messy. Half-formed characters and concepts thrown together with abrupt changes and insufficient background beyond knowledge of YA cliches. Main character arrives at a boarding school that seems to encourage special talents, which she may or may not possess. She is not at all taken aback to discover that she does in fact possess them and is soon wielding power as if she's always known she's a witch. Katy is remarkably blase about the whole witchcraft angle, spending most of her angst on her father, his new girlfriend, and her mother's death years prior.  While I understand those feelings, I do think more time could have been spent acclimating her to being a witch instead of it appearing so suddenly.

Then there's the male love interest who is super popular and immediately reviles her upon first sight, leading to her ostracization by her schoolmates. Then he quickly reverses his position and fights their being together despite their mutual attraction. It was A. so cliche and I didn't feel like he was interesting enough to overcome that and B. only understandable due to the many other YA books with this trope.  Most of the books I've read don't have that many random personality changes.

There are a lot of other aspects packed in to this book too: the history of their version of magic and treatment of witches, within their community and from outsiders; single father-only daughter dynamics; the intrusion of a new girlfriend for the daughter; the pain of losing one's mother so young; what a person will do for family; fighting against chaos. But the book jumped around and pulled me this way and that without capturing my attention or giving me any reason to suspend disbelief.

Her father especially frustrated me as he is painted as just awful, under the sway of his new girlfriend and ignorant of anything about Katy. And it's not just Katy rebelling against parental interference; I really thought he was a bad dad. Then he seems to have a personality transplant and becomes more of a decent person. Again these huge shifts in personality and motivation are standard for the text and created a disorienting effect.

Overall: Poor writing and an abundance of YA cliches led to confusion about characterization and a general indifference to the story. It's not a bad book but it could have used some editing to tighten up the story and a bit more insight into the characters.