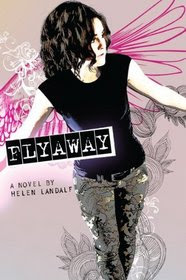 I think this ended up being a book where my age and personality severely clashed with the book. I tired of the immaturity, the extremely poor decisions, and the blinders the main character wore, which hindered my ability to enjoy it.

Main character Stevie lives with her flighty mother, who is also under the sway of an abusive boyfriend and drugs, and is practically failing out of school. She is totally out to sea without adult supervision or any purpose in life. However her Aunt Mindy intervenes, taking guardianship of Stevie and getting her mother sent to rehab despite the protestations of both. And Stevie starts to learn what life is like when she has an appropriate parental unit and what it is like to have someone support her.

There were some good things: the main character's name is Stephanie even if she prefers to go by Stevie as in Stevie Nicks. This is obviously not a decision I support but it really is the least of her problems.  The positive adult main characters (Aunt Mindy and tutor Rick) were wonderful; I certainly wouldn't mind a story featuring them more. The writing is fine and the story flies by (it is very short).

I really struggled to connect with Stevie when she rebelled against her Aunt Mindy. I understand that her mother didn't like Mindy and that would color Stevie's perception. But Aunt Mindy is stable and possesses the ability to follow-through. No matter how much Stevie pushes her away, she keeps trying to get through to her.  I just thought Stevie was so immature even though she tries to act so mature and she seriously makes a lot of bad decisions (some examples: stealing her aunt's car despite possessing no driver's license or formal training; making out with a jerk; encouraging her mom to leave rehab early).

There's also a lot of talk about drugs, seriously in the case of Stevie's mom but rather casually in the case of Stevie and her contemporaries. While drugs are not presented in a positive light, I didn't think they were denounced enough. I guess the author didn't want to be preachy but I feel like some stronger anti-drug sentiments could have been written. There are also some odd plot twists around a love interest for Stevie. There are two possibilities and the situations change rapidly with little sense.

In the end, this was a fast to read story but there was so much stuffed in that nothing received the treatment it deserved and I was left unfulfilled.