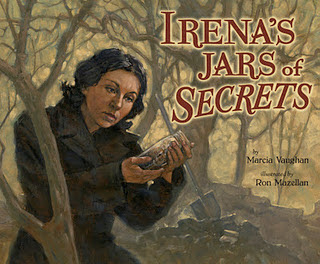 I was actually first interested in this book because of another blogger, Irena at This Miss Loves to Read, because she shares a name with the focus of this book. Thus even though this book is aimed at a younger audience, I requested it from Netgalley.

It tells the story of Irena Sendler who, during World War II, headed a group that saved the lives of about 2500 Jewish children.  She had a special dispensation to enter the ghettos where Jews were forced to live and helped smuggle out children where they were then placed with other families under false identities. The families were promised that information would be preserved so that everyone could be reunited. Irena did this by storing the papers in various jars buried under a tree. She ended up arrested and almost executed but other members bribed her release and she spent the rest of the war in hiding...but still helping as she could!

At the end of the war, Irena dug up the jars to help reunite families. While most of the children survived, the majority of their families had been sent to camps and died. Irena received the Order of the White Eagle, Poland's highest honor and was nominated for the Nobel Peace Prize.

I was not familiar with this story but it ended up bringing tears to my eyes through the bravery and selflessness of Irena and the other members of the groups as well as the bravery of the adults who sent their children away, never knowing if they would see each other again. It was so inspiring to read about ordinary people doing their part against human evil. And although the topic is a difficult one, the book is still appropriate for younger readers due to the care taken with language.