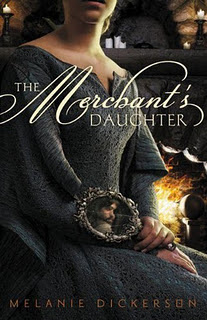 I read Dickerson's previous novel, The Healer's Apprentice, and came out of it with mixed feelings. Still I'm a sucker for retold fairy tales so I requested this one from Netgalley.

At some point, I decided it was a retelling of Rumpelstiltskin (no idea) but it is actually Beauty and the Beast in medieval England. The choice of England for the setting is an interesting one to me as B&B is traditionally French; however I didn't feel very immersed in England. For the little I know about that time period, it might as well have been set in France.

While I deem the setting less important, the characters were very well done. The "beauty" is Annabel, whose merchant father was lost at sea and whose proud mother has led the family to crumble under their debts. As punishment, Annabel will become a servant to the new lord, the beastly (in appearance and temperament) Lord Ranulf. Although a fall in social status, it is certainly preferable to marriage to the loathsome bailiff who does not understand the word "no."

Through their time together, Ranulf and Annabel begin to learn each other's character and fall in love. Annabel has a heart for God and dreams of entering a nunnery. Her pure heart helps to heal Ranulf's pain from the rejection by his beautiful wife, who found his appearance horrifying. Meanwhile Ranulf provides Annabel with a Bible (that she can read...because she can read Latin!) and encourages her spirituality as well as her independence.

Like the other Dickerson novel I've read, the Christianity aspect is very strong; I thought it was handled much better here although non-Christians might find it overwhelming. As a Christian, I appreciated Annabel having the chance to read the Bible herself (although I do think she was far too educated for her position) and the weaving of Christianity into the story.

Overall: A sweet romance, not based on just knowing, but based on getting to know each other and a shared love of Christ.