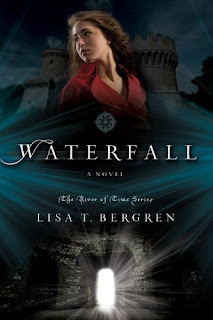 After seeing rapturous reviews of this at Small Review and Edgy Inspirational Romance, I was delighted to receive my own copy for review from Amazon.

This book features one of my favorite plots: time travel.  When Gabriella and her younger sister Lia put their hands on handprints in an Etruscan remains site, they are taken back to fourteenth century Italy where battle between the Sienese and Florentines rages. Gabriella is rescued by the Fiorellos, namely hunky Marcello who is unfortunately already betrothed to a daughter of the Nine, influential leaders in Siena whose support helps Marcello's family maintain their hold.

Gabi wows everyone with her 21st century clothing although she quickly changes into a more time appropriate dress.  Thanks to her nerdy parents, she has a grasp on the Italian dialect in use and is able to communicate fairly well.  Also thanks to her parents, she can wield a sword and has basic medical knowledge that helps her heal the eldest Fiorello son who suffers from asthma.  While her boldness startles the people, they are generally pretty accepting of it and are eager to applaud her awesomeness.  I love when an amazing girl is lauded!  She also navigates the tricky politics of the region well while also searching for her sister Lia since they were separated while coming through time.

The reader spends less time with Lia but she also knows the language and her forte is archery.  I love books with sister relationships and the parts with the two were among my favorite.  Lia is necessary in order to encourage Gabi to return home; as she falls more in love with Marcello, she is less desirous of leaving.

I've seen this classified as Christian fiction but I did not think those elements were very prevalent.  Gabi does question why she was sent through time and begins to think about a relationship with God after seeing the religion of everyone around her but it's never preachy or intrusive to the narrative.

I did have two problems with the book.  First was Gabi and Marcello's romance, which started while he was still technically betrothed: I hate that.  I also didn't find Marcello very swoonworthy as I was more attracted to his asthmatic strategist brother who loves Dante (who I will totally read some day).  The other problem was Gabi's voice.  Her narration is clear and I loved most of her actions, excepting in the romance arena, but sometimes the way her modern voice clashed with the more formal language of centuries ago Italian bothered me.

The second and third books in this trilogy are due out this year (yeah for hardly any waiting!) and it looks like they will include the Black Death, which, while dark, is something I enjoy reading about.  This book did not end on a major cliffhanger but there are still many plot questions to be explored in the next two books.

Overall: A strong start to a trilogy with lots of great characters and historical details. I'm excited for the sequels!

Cover: It looks like the model is wearing a red peacoat which makes no sense in the context of the book because the modern section takes place during the summer.  I do like the pop of color against the blue and black though.
Posted by The Insouciant Sophisticate at 12:01 AM