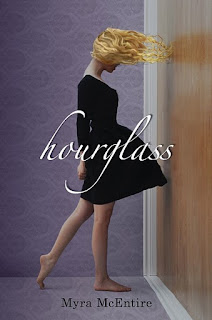 I was intrigued to receive this book as I hadn't heard much about it beforehand.  The mention of "time-slips" caught my attention because I love time travel and it's my not-so-secret dream to someday travel back in time (that's why I'm a history major and I read a good deal of historical fiction). And I loved those aspects, even if the time-travel was significantly different than I had anticipated.

See, Emerson has long been seeing people who no one else can see.  This combined with the death of her parents resulted in her institutionalization for a period of time.  However she feels that she maybe has a grip on the visions.  Until she meets Michael who has the same ability except he sees people from the future while Em sees them from the past.  Together they have extraordinary power that enables them to move through time (to my disappointment they only go back in time about six months rather than to the late nineteenth-century).

And in fact, I really enjoyed all of these paranormal aspects.  Michael was hired by her brother from an organization called Hourglass, which has been involved in exploring and researching such abilities that deal with manipulating time.  Everything about this was fascinating from the other characters introduced including the villainous Jonathan Landers and his associates to the only barely glimpsed powers of the other people.  I'll admit that sometimes the explanations confused me but re-reading them cut through the fog.  I still have questions but I'm content to wait for the next book.

However while the paranormal aspect was great, I was less thrilled with the personal aspects.  Emerson has basically one friend who has stuck by her even through her psychotic periods.  Lily and Emerson are supposed to be close but Lily barely appears as Emerson quickly becomes absorbed in Michael and Hourglass.  I would have liked this friendship developed more especially as Lily seems to have her own paranormal ability.

The other aspect is the romance, of course.  Emerson and Michael seem to fall for each other right away, which is too bad as they are not supposed to get involved: her brother doesn't want his employee with his sister and Michael knows they shouldn't fall for each other.  Additionally Michael knows a lot more than he tells Emerson and she repeatedly has to call him out on that.  He keeps thinking she can't handle it and she keeps demanding the opportunity to know more.  There is also a bit of a love triangle with Kaleb, another Hourglass member.  I didn't really like either guy as I found them both too overbearing and alpha toward Emerson.

Cover: Quite accurate; Emerson actually wears the exact dress in an early scene in the book.