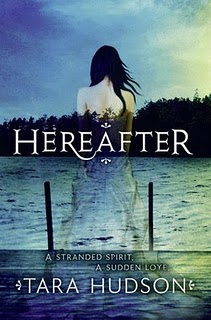 Source: Received an e-galley via Netgalley in exchange for an honest review.

I was interested in this book as it proclaimed a romance between a dead girl as a ghost and a living human boy as well as strong paranormal elements.  After completing, I was very impressed with the plot and writing, especially as other paranormal elements had fallen short for me in other books.

Amelia is a ghost and has been for she doesn't know how long as she spends her days by the High Bridge.  One night she saves Joshua from drowning in the water after his car goes off the bridge; somehow he can see her and they can even touch.  In the days after, they quickly fall in love, bonding over the strange circumstances in which they have found themselves, curiosity over her past, and similar taste in music.  I really appreciated that even though they fell fast, they also spent a lot of time together talking about everything under the sun and thus that there was a basis for a relationship beyond admiring looks.

The other element of the story was the paranormal.  Why is Amelia still haunting the area where she died? She finds some answers from the terrifying Eli, a fellow ghost who understands his powers and is willing to teach Amelia...for a price.  His sinister intentions were well-described but his background also explained his motivations and could create sympathy for the character; I didn't have any but I can see others doing so.  Another character who provides some explanation is Joshua's scary grandmother Ruth, a Seer who can also see ghosts and does not look kindly on Amelia and Joshua's new relationship.  But Amelia also digs deep within herself to become a powerful spirit, figuring out some of the answers to her questions and helping to save the day in the climax.

Besides these characters and plot, the writing was great.  It flowed well and was a delight to read.

Cover: I think this cover is very gorgeous and haunting. I like it.

Read for YA Debut Author and Ebook challenges.
Posted by The Insouciant Sophisticate at 12:01 AM