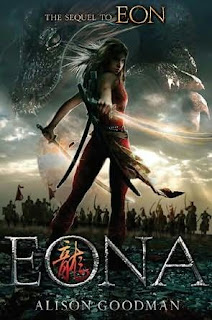 Because I've been reading more than one book a day, I am way ahead on reviews.  Consequently although I read Eon at the end of April and Eona at the end of May, I am not getting around to reviewing both until today.  That is also why there are sometimes two reviews in a day: in an effort to catch up.

My first comment is that this book is SO long.  It was a little awkward to hold, especially compared to the sleekness of my nookcolor and I definitely think some parts could have been edited down.  Instead of breathlessly anticipating the conclusion, I just wanted to know who lived and who survived and I kept calculating how many pages I had until I was finished.  Perhaps Eona would die; except she wouldn't since the story is told in first-person, robbing it of some suspense.

In some ways though this book was sleeker as the reader presumably already knows a lot about dragons and the royal succession crisis because of the first book.  No major new character is introduced (I think Yuso was in Eon) but new facets of the characters are explored especially gender dynamics as Lady Dela and Ryko in particular struggle. Eona adjusted quite easily to being female; I would have enjoyed seeing her struggle a lot more in this regard.

The new mystery revolves partly around Eona's ancestor Kinara, who sometimes tries to act through Eona to take the pearl from Kygo's throat, which would kill him.  She must fight those instincts as well as learn to control her power as well as attempt to protect Kygo from the ruthlessness of his uncle.  Although I knew that Sethon was a threat, there were many sections were his terrifying presence did not hang over the rebellion; it made it hard to remember why there were fighting. However, I mostly enjoyed those segments as well as the twist, which I think will be genuinely surprising to the majority of readers.

Kind of Spoiler:
In the first book, Eona seemed to be drawing closer to Kygo in what would be a tricky romantic relationship.  However this is challenged by the reappearance of Lord Ido who turns out to only be 24, while I had been imagining him as Mulan's father (who is no villain so I don't know why that's the image in my head).  His and Eona's power works through a powerful connection, physical, mental, and sexual.  I wasn't thrilled with her feelings toward Ido after he almost raped her in the first book but...this part ends as it should.

Overall: Not as good as the first due to length and pacing but one you'll probably want to read if you enjoyed the first.
Posted by The Insouciant Sophisticate at 12:01 PM