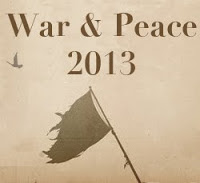 I really struggled with this section as I kind of left it to the last minute to read but I squeezed it in! I was pleased to discover that it was another section set during "peace" following the changing relationships such as Natasha's engagement to Prince Andrei. Unfortunately it's a pretty depressing section with Natasha breaking that engagement and attempting to elope with another (already married) man. Of course, she didn't know he was already married but a lot of other people did considering it was a secret marriage to a Polish woman who has now been abandoned.

The big point of interest for me was Pierre's interest in Natasha. I did read a full plot summary of the book before starting and I *think* they might end up together after more years have passed. I could totally be wrong but I hope I remembered correctly because I really like that relationship and I want good things for Natasha. At this point she's still pretty young and she needs to do some maturing.

Other than that, not really much happened as this section was only about 70 pages (in my translation, which is the Pevear and Volokhonsky version.) I was surprised by the shortness but also very thankful as I had a lot of other reading on my plate. Amy mentioned that the next section returns to "war" so I will need to make sure to leave lots of time for reading that-it takes me so much longer to read the battle scenes as I have trouble picturing what's going on.

(Note: I had originally planned to post my fave reads of 2013 so far later today but I ran out of time so that will be posted later this week, ideally tomorrow.)