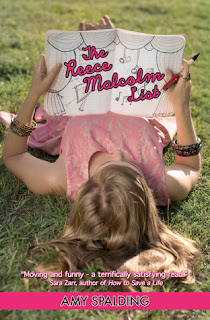 For some reason, when I first saw this title, I recoiled, thinking it was like Sean Griswold's Head and not interested in at all (not sure why as I adore SGH and highly recommend it. My brain is weird sometimes.) Then I saw Estelle at Rather Be Reading's review, which highlighted its musical theater details. Then I read further and discovered that Reece Malcolm is actually the narrator's long-estranged mother and all of a sudden, I wanted this book.

I'm really glad I came around because I had so much fun reading this book especially being immersed in the musical theater life (main character Devan gets to act in Merrily We Roll Along) and exploring the complicated relationship between Devan and her mother as they try to become family. Less enthralling was some of Devan's personality and the teenage love dramas, which I'll get to in a sec.

A quick summary is that we follow Devan who is going to live with her best-selling author mother after the death of her father; she never knew the woman and has a lot of apprehension about the experience. Though Reece is prickly, her boyfriend Brad is amazing and soon Devan is enrolled in a performing arts school and thriving despite still wondering about her place in the family and why hasn't her mother contacted her before now? Can Devan crack the Reece Malcolm code?

The good is abundant in this book. Firstly it was heaven for this musical theater nerd (especially defining my personality in high school despite being pretty tone-deaf) to have so many references-I would have taken even more but I don't know if that would have been isolating to people who aren't as familiar with musicals.

My favoritest part though was getting to meet Brad, boyfriend to Reece and almost superhumanly patient and warm. He makes things easy and is a welcoming presence even when Reece can't quite connect with Devan. There are also two boyfriend options for Devan and I liked how she got to have some fun instead of immediately settling down with the one but I didn't feel like either was that great of an option. Thinking back, I liked pretty much all of the adult characters a lot (like Reece's best friend Kate and the musical teacher Mr. Deans) but not so much the teenagers, who seemed shallowly drawn despite being very important to Devan.

For the most part I liked Devan's voice as she conversationally carries us through the story. I did find some of her personality quirks frustrating. The main one was her habit of constantly apologizing and angsting over her mother. Now these are completely understandable within the context of her personal history. Her father and stepmother were not good parents who did not welcome Devan so it makes complete sense for her to feel awkward and apologetic about being dropped into her mother's life. Still I found it a little over the top and annoying although thankfully as Devan settles into her new life, she stops apologizing all the time. So it's actually an example of character growth but it still bothered me.

The other thing I found annoying was Devan's back and forth relationship with her crush Sai, who is dating another girl for most of the book. I don't want to be one of those adults who complains about teenagers acting like teenagers but I'm pretty sure I didn't act like that when I was a teenager (thank God I no longer am!) I won't spend time elaborating on this point as I think these complaints were both very personal based on my own experiences.

Well, this ended up being pretty long, which is usually a negative sign for me but is actual positive here. There was just so much to think about and I'm really glad I finally picked this one up! Recommended for fans of musical theater/performing stories as well as lovers of funny contemporary.