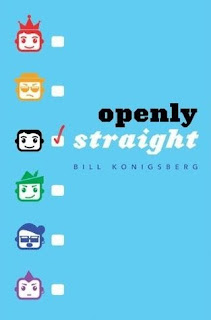 Thinking back, I'm not entirely sure why I wanted to read this book other than presumably my ambition to read all the YA contemporary (a lofty goal to be sure) and as part of my ongoing efforts to read books from the male perspective. I do think the premise is really cool, as will be explained below; it just doesn't seem like a "me" book.

The premise follows Rafe, a pretty ordinary high schooler from Boulder who has worked hard to get into an elite New England boarding school and decides to hide the fact that he's gay from everyone there. Though his friends and family back home have been basically nothing short of supportive, he'd rather that "gay" not be his identifying characteristic. But though he tries to settle in, he finds that he cannot just ignore such an important part of himself nor does he feel at ease with hiding the truth from his friends especially from the boy he might even love.

As I shared, the concept for this is pretty cool. Can he go back in the closet? Can he manage to hide something so integral to his character? How differently is he judged and treated compared to his out classmates (as there are a few)? One of my favorite relationships ended up being Rafe's with his roommate's out best friend Toby, just the way they interacted and shared. I also really liked the roommate Albie who was quite a unique character to be perfectly frank. Other great characters are Ben, the thoughtful boy who becomes Rafe's crush and Claire Olivia, Rafe's best friend from home who is responsible for some awesome quips.

There were two things I really didn't like about this book. One was the essays written by Rafe for his English teacher that reveal character defining moments. I'm not quite sure what I didn't like. It is possible it was the comments the teacher left at the end of the essay encouraging more introspection for Rafe. The other part was the ending, which was so sad to me. As a hopeless romantic, I wanted one kind of ending and yet it would not have been entirely fitting to give that ending.

Overall: A really thought-provoking witty book that will be great for its intended audience and older especially lovers of YA contemporary.