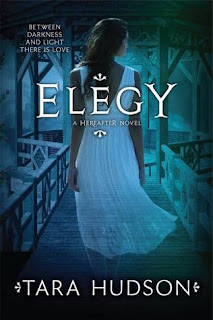 First book Hereafter absolutely enchanted me with its ghost girl/human boy romance. Sequel Arise was less enthralling as I felt like it took a while to heat up in New Orleans. Luckily this conclusion returns to Oklahoma, bringing together all the plot threads and resolving them for a satisfying conclusion.

I'm not going to go too in-depth about the plot to avoid spoilers but I really liked how Amelia and Joshua confronted the impracticalities and challenges of their romance. It did go on a bit much for my taste but it is the dominating fact of their relationship so it's understandable. Their romance is what kept me coming back to these books. I love Amelia's compassion and self-sacrificial personality and Joshua's relative normality considering his love for a ghost and his magical powers.

Other characters continue to play a role like Joshua's sister Jillian and their terrifying Gran while new ones are also added or have their roles expanded to provide more background around the evil that is coalescing. Joshua's parents seem rather oblivious though, which I think is a shame. I think if they'd had power they could have provided support and been an example of great YA parents instead of ones who are physically around but have no clue what their kids get up to when out of sight.

As for setting, I liked that we were back at home base in Oklahoma focusing in on High Bridge where Amelia first died and which has been a focus of dark activity for years. Finally all of the powerful good characters are coming together to take it down and end their reign of terror. I was a bit confused on some of the rules that govern ghost behaviors especially relating to some actions taken by Amelia; some things seemed to change on a dime to be convenient. I was never sure what she could and could not touch. The plotting is rather bonkers if you pay close attention (for example, one kid has easy access to a grenade which they decide would be the perfect tool to destroy the (haunted demonic) bridge.) Still it moves fast and flows smoothly as I always expect from a HarperTeen publication.

Overall: If you liked the first two books, you'll probably want to continue the series. I found it to be a fitting end.

Other Opinions:
Bookistry
Love Is Not a Triangle
Refracted Light Reviews