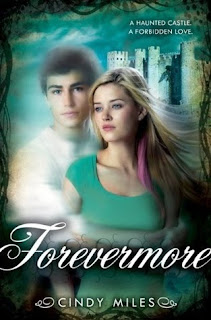 Of all the kinds of paranormal stories out there, ghost and witches tend to be my favorites so when I realized that this was a new addition to the former category, I was pleased and requested it to read. As the time grew near to read and review this, I was also pleased to see its short length, hoping to read it quickly.

I was correct in that it read very fast...unfortunately it didn't really please the part of me that loves ghost stories (and yes, has a soft spot for human/ghost love stories). Overall I found it very bland with nothing speaking to me except for slight confusion over something that I'll discuss in a second that may be considered a spoiler.

The plot for this is that Ivy and her mother are moving to Scotland to live in a castle with Ivy's new stepfather and his grandmother. Upon arrival, the grandmother takes an instant dislike to Ivy and the girl's violin floats in mid-air. Other occurrences and talking with new friend Emma confirm for Ivy that there's a ghost, who graciously reveals himself to her as Logan Munro. But he's not the only ghost around as another malevolent spirit seems to be threatening Ivy's safety-can she solve this puzzle?

As I wrote above, I found this book pretty bland though it had many elements I like. For example, Ivy plays violin which spoke to my viola-playing heart. Scotland is the beautiful setting with many examples of Gaelic to enhance the authenticity. And there's the ghost. But all together, this book did nothing for me. It was easy enough to read and not too infuriating except for the part below.

Okay, this is the spoiler part. So what I found confusing is that after a storm the grandmother has an abrupt personality change and yet no one does anything for 30 years. Her grandson doesn't even seem to have noticed! I just thought that was rather a long period of time and I feel sad for how long she made people miserable with no one daring to say anything.

Overall: I have linked to some reviews below of people who enjoyed the book but for me, this was very unsatisfying.

Cover: Love the accuracy-Ivy is blond and has a pink streak! I didn't see the pink here at first because I was looking at a thumbnail on my nook but now that I look more closely, I am very impressed with how this captures the story.