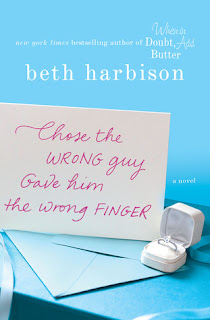 What an eye-catching title, am I right? Those nine words are the explanation Quinn Barton writes to her guests after she abruptly calls of her wedding to long-time love Burke after being informed by his brother Frank that Burke has been cheating on her. She ran off with Frank and although they enjoyed two nights of passion, she felt like she would never be freed from Burke if she stayed with his brother. Now it's ten years later, Quinn hasn't quite gotten over the heartbreak and both men are back in her life when their grandmother asks Quinn to make her wedding dress.  With the aid of her best friend Glenn, Quinn has to start facing her past and reach for a brighter future.

Many times I crave a lighthearted romantic story and from the summary, I thought this might fit the bill. Indeed there were many moments of hilarity usually provided by Glenn who pushes Quinn out of her comfort zone with daily challenges ranging from the relatively mundane to the outrageous. However the angst experienced by Quinn over her feelings for both brothers drove me crazy. They were completely understandable-she had been with Burke for six years, starting in high school, with Frank always being a warm presence as well. But for some reason, I had no sympathy for her, preferring that she go back to chilling with Glenn instead of trying to fight her intense physical attraction to both guys.

Additionally I loved her career. She owns a custom wedding dress shop, designing exquisite creations to please brides of all sorts. I loved getting to see her customers and the way she delicately negotiated their wishes. She also faced competition mostly with grace and was rewarded with a positive outcome. I just wish this could have been more of a focus instead of the stupid guys.

Overall: I guess I wasn't craving romance as much as I thought because the non-romantic relationships and career paths were far more enjoyable than the romance at the focus of the story. Still it might tickle someone's heart though it didn't mine.