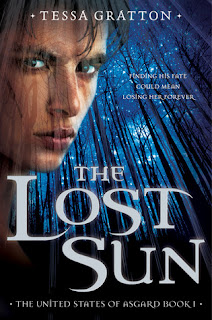 Though this book was released at the end of June, I haven't seen much buzz for it. I find this surprising as I know the author has had popular releases before, it features Norse gods in an intriguing paranormal/alternate history story, and because I really enjoyed it so why wouldn't others?

I will try to keep my plot summary as simple and straightforward as I can. In an alternate history, the United States of Asgard seems to cover what is known as the United States of America in our world and is based on worship of Norse gods who came over. One of those is Baldur who dies at the end of every summer and comes back to begin summer; he is associated with sun (hence the title). To solve the mystery of his disappearance stunning prophet Astrid enlists our narrator berserker Soren to go on a road trip to find him based on the information in her visions. Soren is reluctant as he has been fighting his fate to become a bloodthirsty warrior but succumbs to

My summary above isn't that good but I wanted to try to describe it differently from the official publisher synopsis and I think I did that well! For me, the best part of this book was the writing. I fell very easily into this world and did not want to leave until it was concluded. The plot moved at a fast clip, surprising to me as road trip books don't tend to be among my favorites. I also loved all the bits of mythology incorporated. Though I'm not familiar with most of the aspects, I suspect a lot was modified for this story. I would love to know more about what was changed, o knowledgeable readers!

As for the characters, yes there is a bit of a romance. I have a soft spot for guy who falls for the seemingly unattainable girl and just adores her so this played well for me. I have read some reviews mentioning the romance wasn't very well-developed and I honestly can't argue with that other than to say that for some reason it worked for me but it might not work for you.

One last piece of information to know: though this is the start of a series, it does not end on a cliffhanger. The main conflict of this book (where is Baldur?) is resolved though there are still lingering threads of tension to explore as the series continues; I will definitely be returning! I also want to check out Gratton's other books since this outing was such a success.

Other Opinions:
The Adventures of Cecelia Bedelia
Birth of a New Witch
Miss Print