The Hero's Guide to Storming the Castle 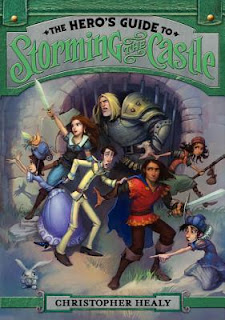 This highly anticipated sequel to The Hero's Guide to Saving Your Kingdom is an absolute pleasure, proving a worthy successor, no second book syndrome here! Its many delights include the chatty humorous narration style, which matches exactly the first book's writing style, the familiar characters plus new charmers, and the way the plot thickens in preparation for book three.

As mentioned the humorous writing style continues. Here's an example of one of my favorite lines: "The element of surprise can offer a hero great advantage in battle. The element of oxygen--also important" (page 382). That's just one that really struck me so I wrote down the page number for reference. There's basically an average of one laugh a page as you go through this whole entire book.

Of course the characters are fab too! For me, the real standouts this time were Duncan and his wife Snow White; though neither will ever win an award for intelligence, they can be depended upon to provide a distraction like none other and are uncommonly sweet. I can't list the number of times I was cracking up because of something they said or did. The other standout was Briar Rose whose vile character I thought was self-evident. Well, not so much as this book complicates her motivations and deepens her character. And as I write this I realize that I have a third standout in the character of Troll who is just awesome and who fully enlivens the pages on which he appears. Okay, I totally could go on but seriously pretty much every character is great. Still I did struggle a bit to differentiate personalities and motivations of the princes Frederic and Duncan-their timidity tends to confuse me. But I think I almost have them straightened out.

So why didn't this get a perfect 5 stars? I feel like it's a little on the long side. Yes, I flew through the book but still an itsy bit on the long side. Additionally I wasn't that impressed with the villain(s). I liked getting to see their side and what was being plotted but I twiddled my thumbs a bit during those sections, waiting to return to the Princes Charming and co.

Other Opinions:
The Book Monsters
Buried in Books
Paranormal Indulgence