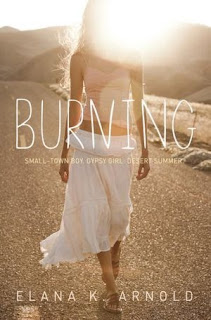 My review is a little spoilery but not explicitly spoilery.

When I first saw this book, I liked that it was contemporary and featuring Gypsies, a group I've never read a book about, but it wasn't a must-have. Now that I've completed the book, I really admire the writing and thought it was pretty well-plotted but for some reason it still didn't click enough to earn a perfect five star rating from me. I guess what I was feeling and wanting to read didn't gel with this book.

We have two main characters. First is Ben Stanley, resident of Gypsum, Nevada, a town based on a mine that is closing and subsequently disbanding. He is one of the lucky ones; while his family and some of his friends are going to Reno, he has a full scholarship to UC-San Diego. Still his fortune leaves him uneasy and he's not sure if he's ready to leave. His path collides with Lala White and her Gypsy family. When Lala reads Ben's cards, it sets off a string of events neither could protect.

There are so many great parts to this book though I will only talk about a few right now. One is the dual perspective with very distinct voices. Lala has a much more formal way of speaking and often seems to talk with bemusement. Ben is a pretty typical American guy albeit with a slightly cleaner vocabulary than I imagine. There are some beautiful passages in here that I'm sure other more sensitive readers will appreciate more.

But my most favorite part was Lala's journey. The Gypsy have pretty strict gender roles and long-held traditions such as the one that will see Lala married to a man of her family's choosing shortly after her eighteenth birthday. However Lala does not just blindly follow tradition. She is a reader, she questions, she sees a whole world out there. When she makes an unforgivable choice in her family's eyes, she gains new experiences with Ben but faces being as trapped with him as she would have been with her family; needless to say she makes the brave choice earning her a feminist fist pump from me.

Cover: I wish her skirt was just a teeny bit longer as that more accurately reflects Lala's attire.