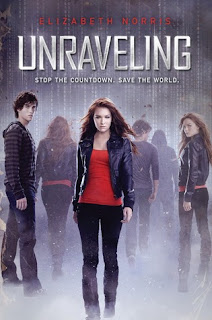 While I always hope to love the books I read, I know that doesn't always happen. But this book absolutely swept me away and it's for a reason I try to avoid letting take over. See there's this boy...and I try really hard not to let my feelings for a fictional boy sway my overall rating for a book but he gives our main character basically the best first date ever and after that I was hooked on him as well.

Before meeting this unexpected boy, I wasn't sure about the book. The cover and tagline made me think of "Heroes," a show I never watched and had no interest in watching especially after I heard how bad the second season and onward got. But I guess the title stuck in my head so it was one of the first books I picked up when going through my list of 2012 releases I still really wanted to read.

At first, I wasn't too keen on what was going on. I felt a little overwhelmed with all the new information before I settled into a rhythm. In the first few chapters, Janelle is hit by a car, dies, and is brought back to life by Ben Michaels (the aforementioned boy). While everyone marvels at her healing, nobody believes her that she died and this prompts her to seek out Ben. Additional backstory is that her father works for the FBI and she has always spied on him, including seeking out information about his latest case involving a mysterious device that is counting down.

As the book progresses, the plot goes insane and what seems almost like a contemporary turns out to be kind of science-fiction but not too much. Each chapter opens with the new time from that device, going ever forward to who knows what will happen. Consequently, the chapters are tense-are we going to be able to stop the countdown? Plus the chapters are pretty short, the surefire formula, in my opinion, of making a book a fast read.

I really liked Janelle although I had some trouble with her name-not sure why that was the element that threw me. She's very blunt and determined, family-oriented and loyal-some of my favorite qualities in a heroine. The other characters were pretty well fleshed out too. She has her best friend Alex and her younger brother Jared (who I confused several times before remembering that the "J's" are siblings). Then there's Ben and his two best friends Reid and Elijah, all of whom are more than they appear. Additional characters include Janelle's parents, her ex-best friend, an ex-boyfriend, and other people at the school. It felt like a pretty big cast but it focuses on the main ones I mentioned here.

Standout moments: Janelle and Ben flirting in class over a literary prompt; that *perfect* first date.

Content warning: The first few chapters are pretty clean but soon the profanity ramps up (a lot of f-words).