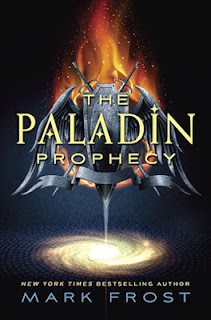 I saw this featured on one blog in particular in December (can't find link any more although I have links to some other reviews below) and was caught by the premise of the main character being sent to a futuristic fantastical boarding school.  So I requested it from the library and was given pause when I saw what a massive book it is. Luckily it moves pretty fast.

Our story centers on Will West (have I mentioned that I love book boys named Will?) whose parents have tried to keep him under the radar, downplaying his spectacular gifts, constantly moving and training him with an expanding list of rules, currently numbering 98. All of this preparation ends up being needed when Will's parents are taken by some creepy guys in black caps, sending Will running to the only place that might be able to provide him security: the aforementioned boarding school, which is recruiting Will exactly because of his special abilities. Once on campus, Will meets a whole host of characters, from his brilliant roommates to the tyrannical upperclassmen to instructors of various temperaments. He begins to realize that his talents place him squarely in the middle of an epic battle with fantastical forces far beyond anything he's ever imagined.  And since this is book one, we're only getting warmed up!

I really liked Will. Yes, he's tremendously special but once he's at the school, he seems a bit more ordinary because everyone there is similarly smart and gifted. He is also quite humble and very loyal. One of his big challenges is to ignore a bit of his upbringing and learn to trust his four roommates: Ajay, Brooke, Elise, and Nick. I also really loved his roommates, who were all distinct personalities to me except for Brooke who is going to need more characterization for the next chapter.

This is a very action-packed book with many physical moments. Will is constantly on the run (including an intense scene at his first cross-country practice) and each time it seems to escalate more in violence and danger. Some reviews have mentioned that the writing is very "telling rather than showing." I thought it worked and felt very cinematic but for people who don't like that kind of writing, be forewarned. I would also say this is more of a plot-driven novel rather than character-driven if you couldn't guess from the mention of all the action. Still I feel there is a bit more character development here than in other action novels.

I do have a few complaints though. For example toward the end everything went kind of crazy leading up to the big climax. Because I was desperate to know what was coming next, I may have read the book a little too fast to fully absorb everything. There is also the character Todd, a secondary antagonist for Will who I presume will play a bigger role later on as he is not resolved in this book; I really want to know what happened to him. And since this is a series, there are still a lot of unanswered questions about the overall struggle. There is a tiny snippet of book 2, Alliance as it seems to be called, and although far too short, it is a great teaser for those who liked this book and should leave you craving book two.

Other Opinions:
Book Sake
The Overflowing Library
The Paperback Princess