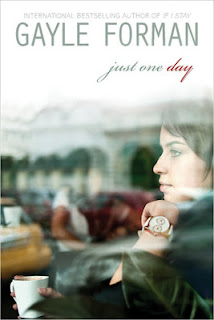 I was fortunate enough to receive this ARC from the publisher in exchange for an honest review. I've read Forman's If I Stay, receiving it with very mixed-up complicated feelings. But the premise for this was so appealing (travel in Europe! College! Shakespeare!) that when it arrived, I knew I'd give it a try.

First part: Allyson (sidenote: I have an unreasonable prejudice toward this name as my sister's is Allison and thus I feel like the only way to spell the name is with two l's and an i. It's stupid, I know) is a senior on a whirlwind school trip through Europe when she meets the Dutchman Willem and impulsively embarks on a day trip with him to Paris, intending to spend just one day. But soon she wants more, leaving her ruined when she wakes up and he is gone. Yes, he didn't make any promises but moving on feels impossible for her. For one day, she was glamorous Lulu, not dull dutiful Allyson, moving without an itinerary, a plan or a map, just on pure impulse for fun.

This part was okay. Allyson feels resentment toward her best friend Mel, who is embracing the new opportunities while Allyson is a stick in the mud as well as toward her extremely overbearing and interfering mother who can hardly let Allyson be. These feelings help explain why she's so eager to assume Lulu and run off with someone she doesn't know (this also kind of happened in Wanderlove and I hated it there-I do not feel like it is a safe idea and safety should be paramount). Then she has what she considers an amazing day although it doesn't sound all that great to me, probably another reason why Allyson and I didn't click.

The second part was aggravating. Allyson is at her college near Boston (Harvard? It's never stated but it makes me think of Yankee Doodle Dandy-movie shoutout :) and enrolled in premed courses as pressured by her mother but she doesn't want to do anything. She is tired all the time and floundering in school for the first time ever. I hated Allyson in this part. I understand that she was depressed but a. he was a one-night stand, why does he get so much of her attention? and b. she's a fictional character so I have zero sympathies for her hardships. I felt like she tossed everything aside because of this stupid boy, who she pinned so much of her aspirations and hopes to be a new person. Just be a different kind of person, Allyson!

Luckily for the third part she soon starts to take that advice, meeting the amazing Dee, one of my favorite book characters ever! He understands trying on all your different personae and without even trying, serves as an inspiration to Allyson, demonstrating friendship when she sorely needs it. She also begins to get more out of her head and makes plans to track down Willem, including a trip to Paris. These events set us up for the forthcoming Just One Year, which I believe will be told from his perspective and let us know what happened after Willem left in Paris.

Overall: I can definitely see why so many people have liked this book but it was most definitely not for me. Also really great for people who love travel as there are some great descriptions of Europe in here.

Cover: I love the watch-it is so fitting!