A Smidgen of Sky 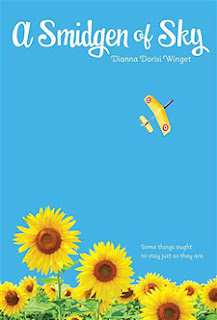 This is another book where I was lured in by its beautiful bright cover-isn't it sunny? It is making me feel better about the weekend being over and returning to work. And the plane is very appropriate for the story.

What is the story? Well, Piper is resentful of her mother's new boyfriend and his daughter because although her father has been gone for years, surely he'll return and their family life can resume. So she acts out against the guy and the daughter, including developing a plan that will throw off the wedding while also searching for more about her father. But what happens when you get exactly what you think you want?

As I said, I was mostly drawn to this book because of its cover but I enjoyed the contents with a caveat though. Piper is ten years old and as an adult, it was a little hard watching some of the decisions she makes and already being able to foresee the negative outcomes that would result. She is a stubborn and spunky kid; I admire her gumption but she's young and she makes some big mistakes that are thankfully fixable.

I guess that is what I ultimately liked most about this book-the underlying optimism and the sense that everything would end happily. As it's written for a younger audience, I found it to be a quick easy read with sympathetic characters and good life lessons. Although it does not shy away from the unpleasant aspects of life, there is also love and humor to balance them out, making for a great lazy afternoon read.