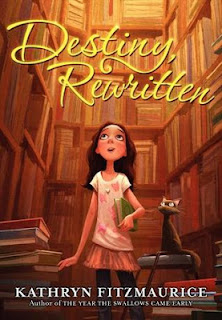 This book hooked me quite simply because of its cover. Look at how cute that girl is! Look how she's surrounded by books and a cat (that's kind of my life :) Plus I love the font for the title. Everything boded well for a good read.

And that prediction panned out. Emily Elizabeth Davis was named fortitutiously after her mother picked up a book of poetry from Emily Dickinson. Thus ever since birth, it has been ordained that Emily would grow up to be a poet. However lately the eleven year girl is struggling with that profession destination as well as with other times her mother says to leave something to fate, such as discovering the identity of her father. When her special book of poems goes missing, Emily goes against fate to track it down and get it back, discovering some very surprising truths along the way.

So I think a big draw here will be the heroine, Emily who is an absolute delight. She's bright and inquisitive, a good friend, and a lot of fun to be around. I would want to be her friend if she was real or if I was a book character. As a narrator, she led me quickly and simply through her story. Similarly the characters around her are fun to meet: a great mix of adults (like her mother and aunt) and kids. I loved their quirks like her English lit professor mother's love of five-paragraph papers and her cousin's interest in spy thrillers.

The big theme of the book is over how much control do we have over our destiny. Emily's mother believes in leaving everything up to fate, including whether or not she'll reconnect with Emily's father. Emily is more organized and interested in affecting her own fate. Her explorations of this idea play a big role in the story. I do believe that we as humans have a lot of ability to control our own fate and I ended up somewhat irked with the mother for what feels like to me a lackadaisical approach to life. I was especially disappointed with her refusal to tell Emily anything about her father (this is compounded by my love of advice columns where hiding such information never leads to anything good). Still everything turns out well with some remarkable coincidences that made me smile, which I think would be the end result if you picked this book up :)

Discussion question: What do you think about destiny/fate? How much can you affect it or do you just say "Que sera, sera"?