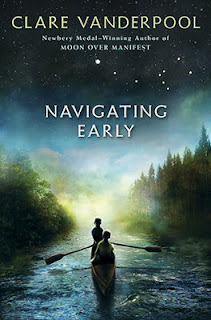 This book was first brought to my attention by some Waiting on Wednesday posts and I was captured by the description of young Jack forced to move from Kansas to Maine after the death of his mother and enrolled in a boy's boarding school. There he meets the strange Early Auden and as events transpire, they end up in the forest for some time searching for something. It doesn't seem like a Stephanie book (where are the girls for one thing) but it struck me. I am very pleased to have read this!

I liked so many elements of this book. First I loved the main character Jack, struggling in this new world without his mother and with his distant military father at a distance even when they're in the same room. I also loved Early, who would probably be diagnosed with Asperger's syndrome in our world but not in his. His interests are varied including knowing the number pi to many digits, music beyond the typical kid's interest, and the zoology of Maine, for example. He is also suffering from the death of his idolized older brother who he believes is still alive. It is this quest to find Early's older brother that sends the boys into the woods.

Once there, multiple plot threads are opened and then skillfully brought back together at the end. It reminded me of Liesl and Po and thus feels like a characteristic of my favorite middle-grade titles. I felt so satisfied seeing how x fit with y in the context of the larger story. I also loved the themes about family and healing as both Jack and Early end in better places in regards to their family. Just tremendously satisfying!

Meanwhile I had mixed feelings about the historical setting. It takes place just at the end of World War II with the threat of war still hanging over everyone. The world had not moved on. However it doesn't feel very historical to me. I think this is partly because much of the book takes place in the woods as well as referencing other even older time periods.

Ultimately though it was what I didn't like that dragged down my rating and slowed my enjoyment of this book. See, every few chapters Early tells more of the story of pi. We switch perspectives, including using a new font, to follow his narration of Pi as a person. The themes here coincide and reinforce the themes of the book. However as I was so enchanted with the novel proper, I found it intrusive and annoying. I dreaded flipping the page and seeing more of that story. Each chapter is pretty short but still.

Overall: I am so glad I took a chance on this book outside my typical read as I was well-rewarded. It was a delightful experience and further solidified my desire to read more middle-grade titles this year as the quality is just so high.