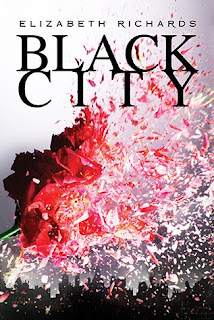 This book caught my attention quite easily with its gorgeous explosive cover. While I still retain a deep fondness for covers with pretty dresses, I am finding myself more open to other images and the destruction of this rose is simply captivating (and appropriate for the story).

Would that I could say exactly the same about the story. It's not bad by no means but the most accurate description I have is that I found it pleasant whereas I would prefer to rave incoherently about how much I love a book. This story does not push me to that level despite enjoying it and planning to read the second book.

What really worked for me was the dual narration. This is an example of a book where I basically liked both of our narrators equally which is not always the case. Natalie is the daughter of a prominent politician, returning to Black City with her mother determined to implement new legislation from the country's leader, her beloved sister broken from torture, and her father dead. She also recently discovered her boyfriend/body guard Sebastian cheating on her. So Nat's not in the best condition. But she's better off than Ash, a twin-blood (human father and Darkling* mother) in a city literally divided in to two with humans warily living their lives while the Darkling population is confined to ghettos. He is also peddling the Darkling drug Haze to humans in order to ensure his family's survival.

As the first book in a series, there was a lot of introduction. The politics and world-building were something I was intensely interested in at first but soon the characters took over much more of my interest. As you might have guesses, Natalie and Ash do end up falling for each other after a protracted struggle due to an instant mutual dislike and then the edicts against interracial relationships. Their relationship is further complicated by other love interests for each and various misunderstandings. The course of true love never did run smooth but I'm rooting for the pair.

However it took me a long time to finish the book (three days) which is not something I can say about the books I love most. When I'm enjoying a book, I fly through it and enjoy a leisurely reread. I never savor a book I'm loving because I'm so passionately involved in the story that I can't wait (of course I'm also dreading the moment I reach the end-it's a difficult bunch of feelings).

I would be remiss to not mention two of my observations of how this book relates to other YA. First was the frequent use of the word "sparkling" most often in reference to Ash's eyes but which always made me think of the sparkly Twilight vampires. The second note is how much the epilogue reminds me of the ending for The Hunger Games (book/movie, not trilogy as a whole). Did anyone else notice the similarity?
*Also Darkling is going to bring to mind Shadow and Bone for me. Plus dual narration makes me think of Legend.