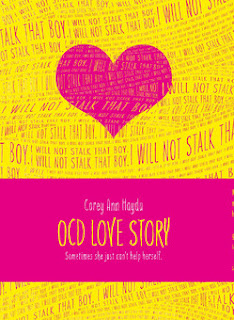 As has been pretty well-documented on this blog, I adore YA contemporary with romance so the title of this made it pretty much a done deal. Plus how could I resist the call of its pretty bright colors?

The story follows Bea, a young bright teenager, filled with passion and excitement. She has goals for the future (costume designer), she likes kissing boys (kissing is fun), and she's also in therapy for OCD. Initially during her group therapy, she feels like the normal one; I mean, she isn't pulling out her hair or completing tasks in groups of eight. But as the book progresses, we can see the toll her OCD really is taking on her and those around her (like her accidentally enabling friend, the boy she likes, and the couple she stalks, yes stalks.)

This book became super hard to read the further I got into it as the reality of Bea's condition becomes clear. For so long, she is able to convince herself that things are fine, that if she follows certain rules everything will be fine, until she can no longer hide from the truth. Most scary is her stalking of a couple after eavesdropping on them in therapy. She follows them home, she records everything she can, and she even tries to ingratiate herself in their company. Thankfully she doesn't become violent but the extreme invasion of privacy is enough. This is an intense book and all the feelings felt by Bea are well described and were definitely felt by me.

I especially loved the relationships in this book like Bea's with her friend who I described as accidentally enabling Bea. This friend loves Bea and they've been close for a long time but she doesn't fully understand what is compelling Bea so while her actions initially are those of a friend, she also comes to realize that she is not actually helping Bea and takes drastic action to fix that situation. Also of interest is Bea's blossoming romance with Beck, who she meets while he's experiencing his first panic attack and whose compulsions manifest in extreme exercising and repeating tasks eight times in a row. His journey and breakthroughs contrast with Bea's. Though this romance is not necessarily destined for a happily ever after, the relationship has its bright spots within its unconventionality. I do wish the parents had more of a presence as their daughter certainly seemed to need them; I don't entirely know how to account for that although it would have been a very different story otherwise.

I feel like my thoughts about this book are all over the place so really the best thing I can say is to give it a read for yourself-the story is incredibly engaging and though it's not easy, it's definitely worth it.

Cover: Love the combination of pink and yellow-makes me think of lemonade as well as wanting to try to rock this color combination in a real-life outfit.

Other Opinions:
A Girl, A Boy and A Blog
Candace's Book Blog
Chick Loves Lit
Rather Be Reading
The Flyleaf Review